Tackling a marathon no easy feat! The amount of training and preparation is a testament towards both your mental and physical fortitude. Athletes from around the world are currently put in hundreds of hours training for their next “big” race. For those looking to push the limits even further, there is a culture out there that takes endurance races to potentially-dangerous level. Imagine enduring several days’ subarctic temperatures, sickening altitude climbs, and traversing natural terrain obstacles just to reach the starting line? Welcome to the world of Ultra Marathons – hundreds of mile long races that combine the logistics planning of climbing a single Himalayan peak with the survival instincts of enduring the natural dangers of the wild. We have gathered the 10 toughest, most unforgiving, ultra-marathons from around the world. Do you think you have what it takes?
Pacific Rowing Race 2016 ( http://www.greatpacificrace.com/ )

If you’ve ever used Google Map’s to find walking directions to Hawaii, be prepared to swim, jet ski, or row the entire way there. Although it might sound like a comedic joke, there is an event out there that actually promotes that sort of thing. In June 2016, teams will be racing from Monterey, CA across the world’s largest ocean to Honolulu, Hawaii. Teams of two to four will compete against each other in a grueling 30-80 day journey, spanning over 2,400 miles of vast ocean, with only their muscles on their limbs as fuel. Not for the faint of heart, the Great Pacific Race is considered the only human powered race on the Pacific. Personally, we prefer the convenience of flying.
Pikes Peak Marathon – Colorado Springs ( http://www.pikespeakmarathon.org/ )

Think you have what it takes to live like a true mountaineer? If oxygen isn’t a necessity for you then you will coast through our next race. Oxygen is available, but you will be lucky if you can even use it. At over 12,000 ft., above sea level, an altitude where even trees refuse to grow, it takes an average of 30 minutes for the most trained athletes to cover a mile. In just 10 miles you will climb more than 6,000 vertical feet. If your organs are strong enough to withstand the amount of exertion involved in high altitude, the next few miles downhill after you reach the peak is bone crushing (literally). Rocks, boulders, and gravelly soil will test the limits of your limbs. If you somehow make it passed the finish line, you will be met by hundreds of your fellow racers in the medical tent.
Antarctic Ice Marathon – Antarctica ( http://www.icemarathon.com/ )

Altitude isn’t a problem for you? If the Colorado environment isn’t considered dangerous enough, what about experiencing subarctic temperatures in a region certified in being so hospitable that life has general never fully adapted to it? Mainland Antarctica represents the last frontier left to be conquered, and for good reason. Just a few hundred miles from the South Pole, the race starts just at the foot of the Ellsworth Mountains. The constant sub-zero temperature and hurricane-strength winds have been known to reduce people to squirming. Your mental fortitude will be pushed to its limits when you experience days of seemingly endless frozen plains. If the exhaustion doesn’t kill you, the prolonged exposure to subarctic temperatures definitely will!
Jungle Marathon – Floresta National De Tapajos ( http://www.junglemarathon.com )

Our fourth race is considered the most exotic of them all. Dense vegetation? Abundance in fresh water? You may find yourself questioning why the Floresta National De Tapajos in Brazil is on our list. The marathon offers two races: a 63 mile four stage course, or 150 mile six stage course. Do not underestimate the conditions of the rain forest for the environment is just as unforgiving. Humidity swamps, poisonous plants can be treacherous, but so is the abundance in wild life. After spending a few days enduring the harsh environment of the amazon, you’ll figure out where you truly rank on the food scale.
Marathon Des Sables – Sahara Desert ( http://www.marathondessables.co.uk/ ) 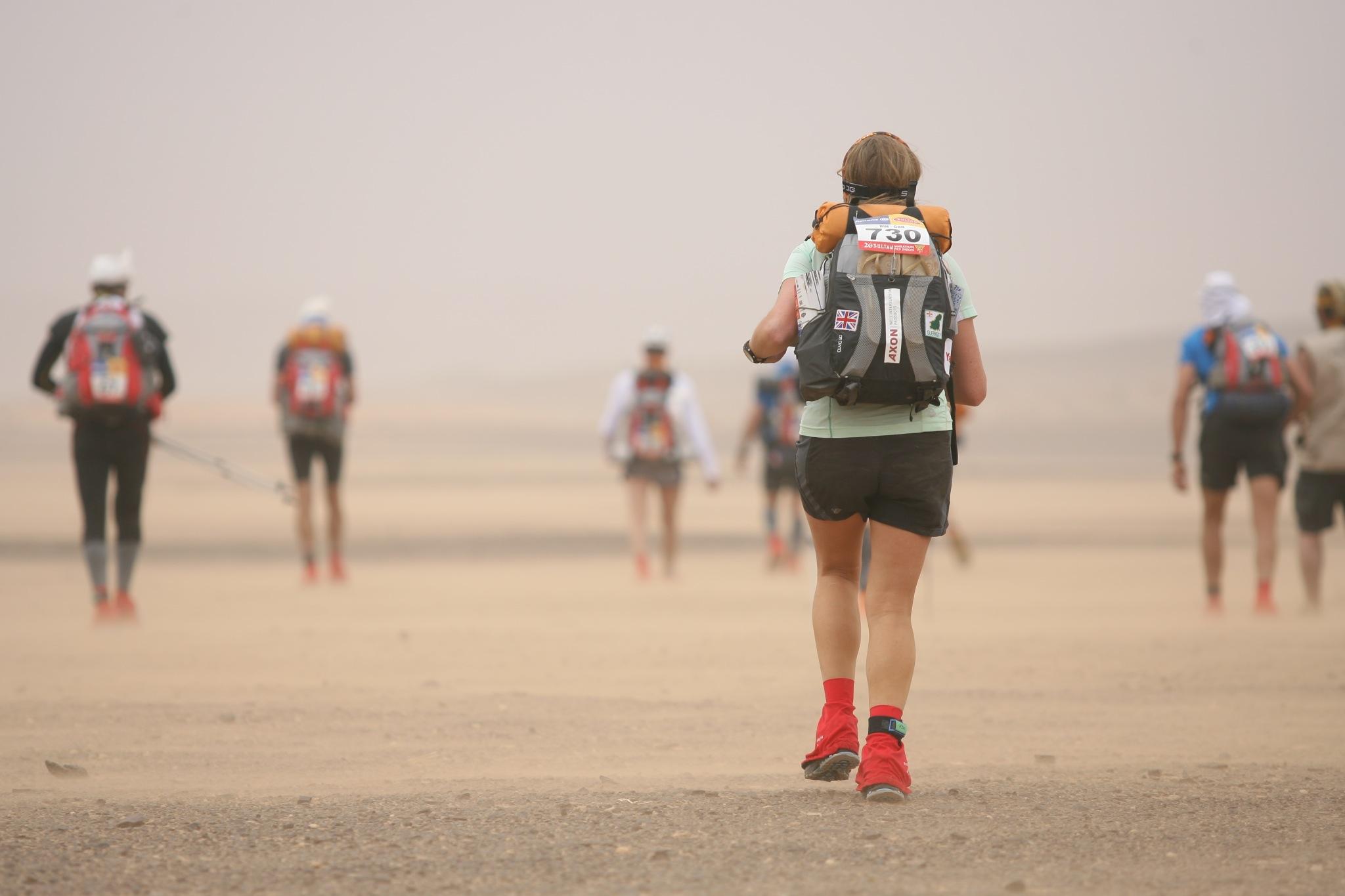 If there is anything to be learned from watching movies about the Sahara Desert is that it is closest thing to “hell on earth” our planet could possibly conceive. Proclaimed “The Toughest Footrace on Earth”, the Marathon Des Sables is a six day, 154-mile trek, through the Sahara Desert in southern Morocco. Equivalent to six full marathons packed into one, the solo participant will need to register nearly two years In advance. With sand so fine that is absorbs all foot momentum, you will find yourself slogging through the entire race. Combined with over 100 degree weather, no section will ever be relaxing. We recommend reconsidering any potential thought to signing up for the Marathon Des Sables. Trust us.
Enduroman Arch to Arc – London to Paris ( http://www.enduroman.com )

For our last, and arguably toughest, race is the Enduroman Arch to Arc race in Europe. Held in June, the 290-mile triathlon that will take you from the beautiful arches of Dover, England, to the Arc De Triomphe in Paris. What we haven’t disclaimed is the 22-mile swim across the English Channel, followed by the 181 bike ride just to reach the outer reaches of Paris. Don’t feel bad if you don’t end up finishing, only seventeen athletes have ever completed the challenge. To show you just how super human you would have to be to even reach the finish line, the current record for fastest time stands strong at 73 hours and 39 minutes. So if professional marathon athletes takes an average of several days just to finish, imagine how long the amateur athlete would take?